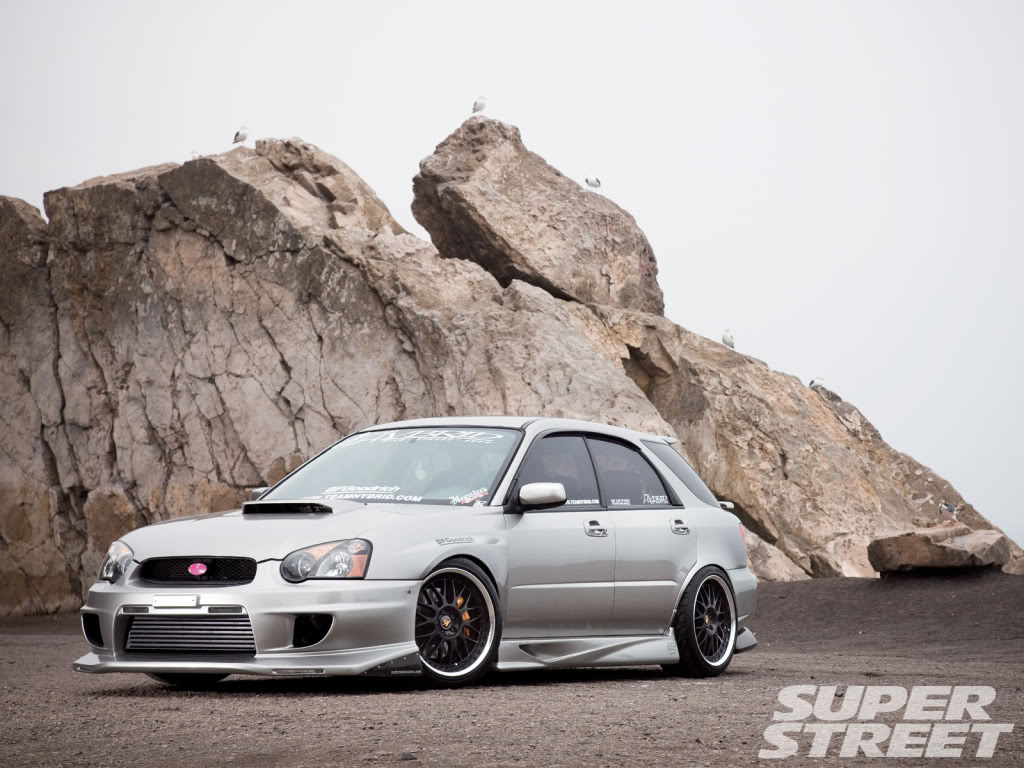 Congratulations to NorCal Chapter’s Joseph Bacigalupi’s 2005 Subaru-Voltex Wrx Wagon for being featured and written about in www.SuperStreetOnline.com. For the exact link of the article, please visit http://www.superstreetonline.com/fea…gon/index.html

Let it be a forewarning that the photos on the coming pages are terribly misleading. It’s not the photos themselves per se, because they’re nothing short of excellent, but I’m referring to the subject matter itself. At first glance it may look like a Subaru STI equipped with Voltex aero. A more in-depth look, specifically towards the rear, reveals that it in fact isn’t a STI sedan-an extra hump on the rear clearly indicates that it is of the wagon variety. If you were initially fooled, then you either weren’t paying very close attention, or the WRX sedan front fenders played a trick on your eyes. What may have also thrown you off your initial hunch was the complete Voltex body armor. A WRX wagon cloaked in Voltex gear just isn’t something anybody is used to seeing every day. The only person that’s accustomed to such a rare combination is the owner himself, Joseph Bacigalupi, and his partner in crime, the family dog. We’re sorry to tell you that this Voltex track-prepped 4-door STi is actually an aggressively-styled, WRX wagon that’s main purpose of existence is to act as transportation for a canine. 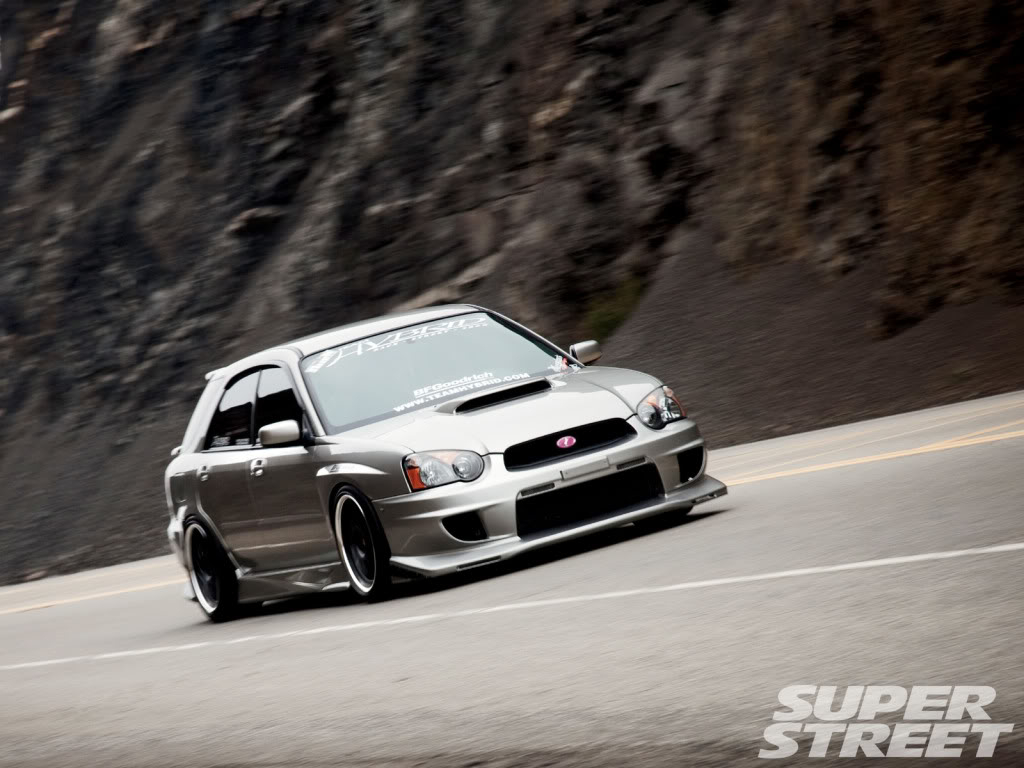 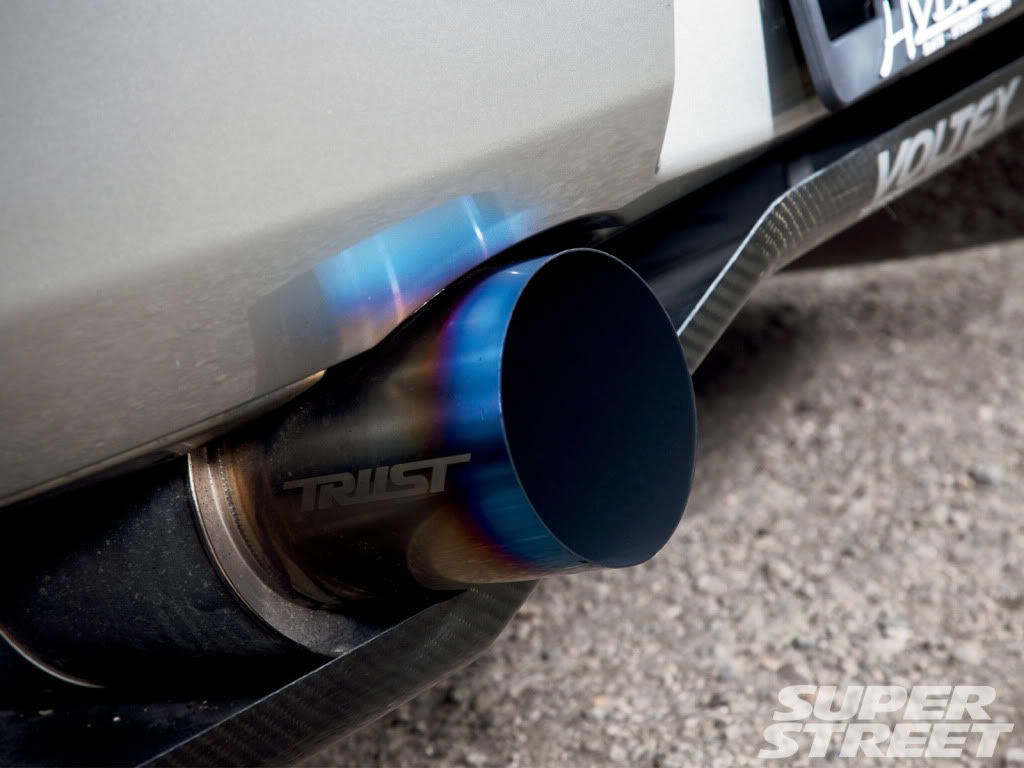 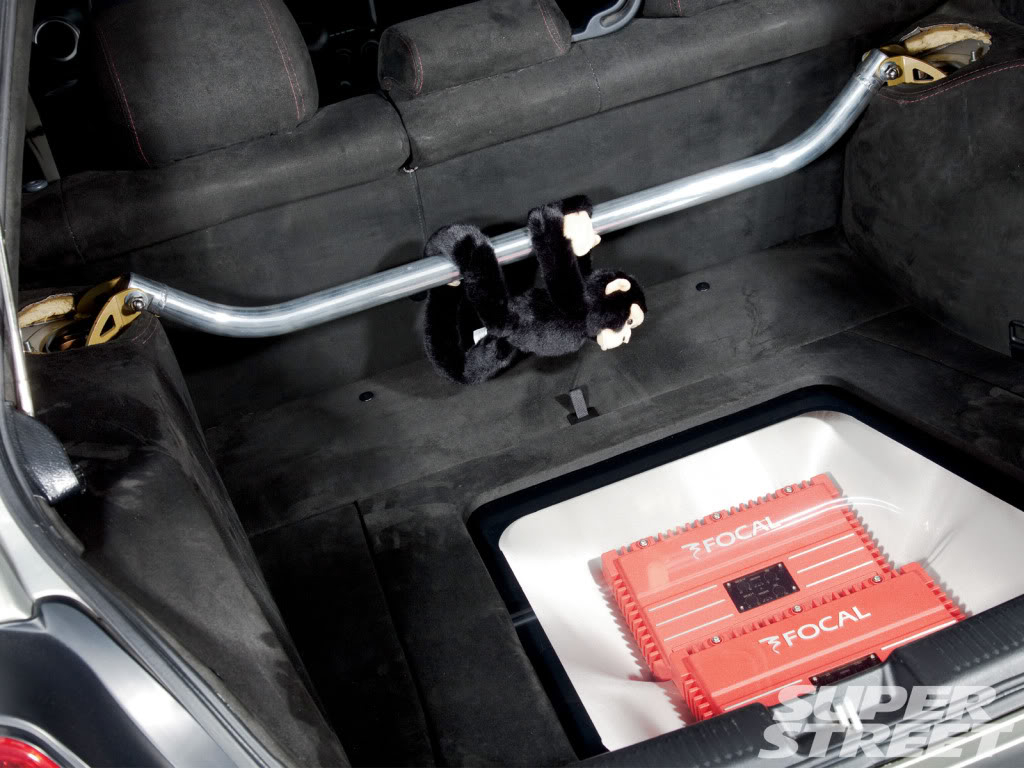 “I originally bought this car in 2005 just as a means of transportation for the family dog and for something I could use in the snow,” Joseph says. “I never intended to do any modifications but that’s usually how it starts. After throwing a set of rims on, I thought the car looked terrible. I decided to lower it to see if it would help and the rest is history.”

2005 Subaru Wrx Wagon Headlight
What foreshadowed the later, more extensive modifications may have been the initial set of 18×10″ wheels that Joseph decided to install. A ten-wide wheel may almost be the standard nowadays for all the aggressive wheel fitment fanatics, but for a wagon that was designed to house 16×6.5″ wheels, it definitely posed a problem. To combat this issue, he replaced his OEM front fenders with a set of sedan fenders that were rolled flat and pulled by Image Autobody. For the rear, he had the inner and outer fenders cut and pulled along with the addition of a sedan STI rear flare, which was re-welded to the OEM quarter panel. The final result yielded just enough room for his current wheels; a custom-coated flat-black set of 18×9.5″ Work VS-XX rollers. 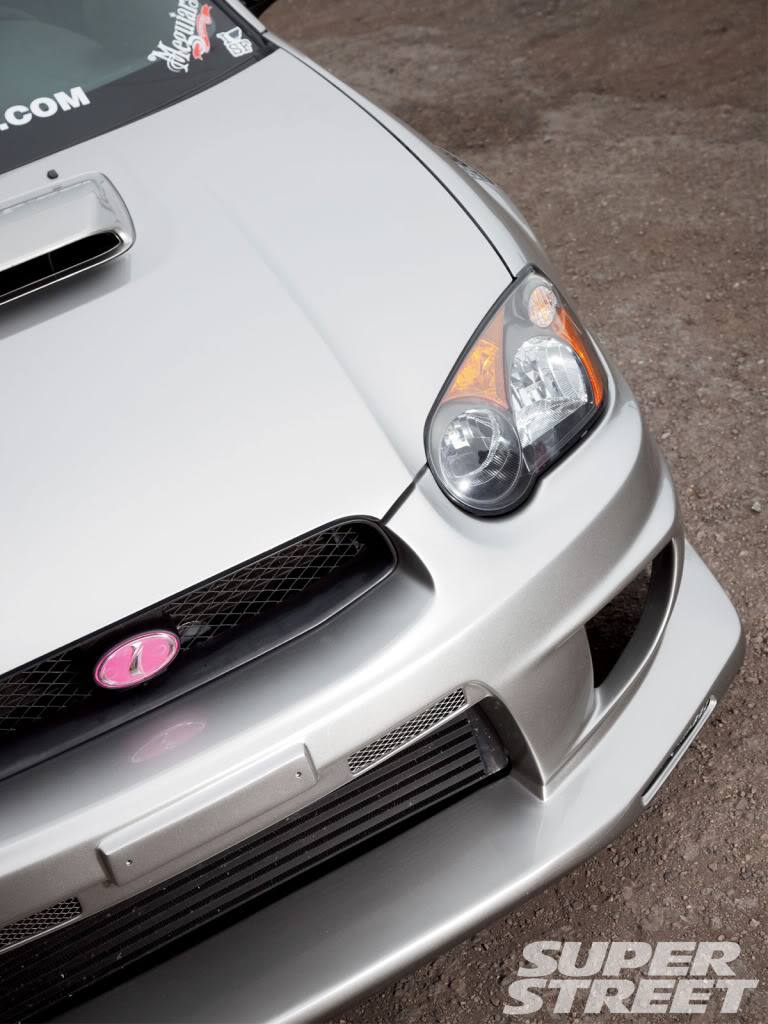 It didn’t end with just the metal reconstruction of the fenders. The Voltex kit also required some reshaping to fit correctly. “To my knowledge, this is the only WRX wagon rocking a full Voltex body kit,” Joseph claims. “The rear diffuser is custom fit. All the original hardware had to be modified to make the diffuser fit to the wagon rear bumper.” Sunny Wong from Franklin Autobody re-sprayed the wagon in Crystal Grey Metallic after assuring all modification work on the kit was fitted correctly. 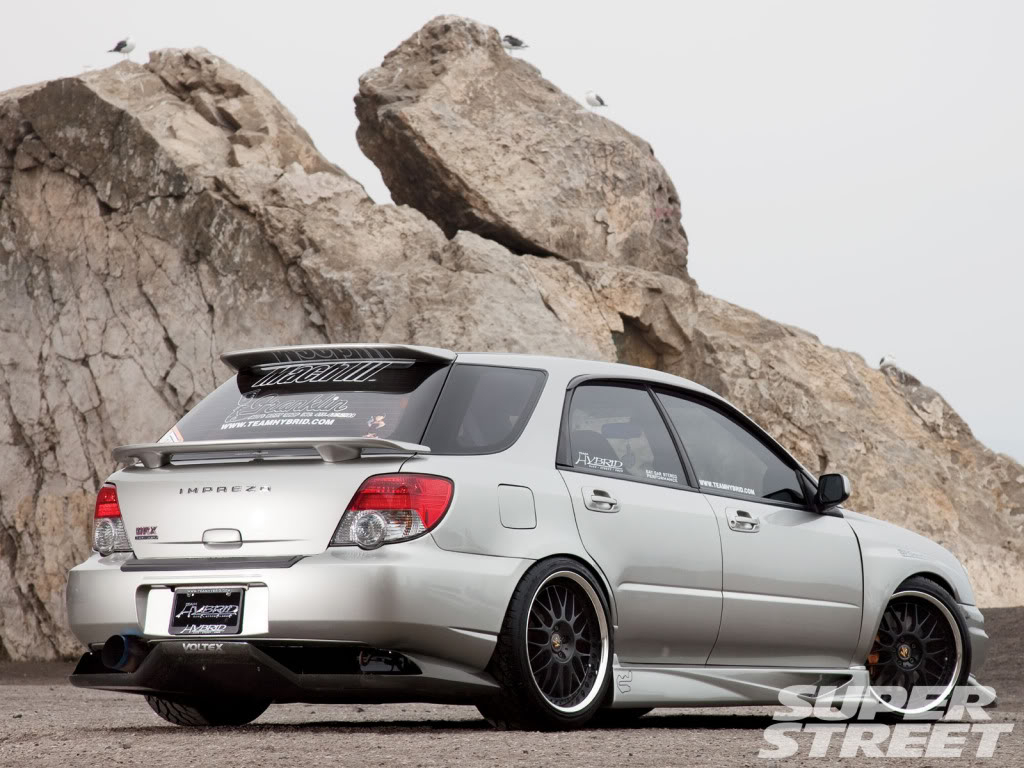 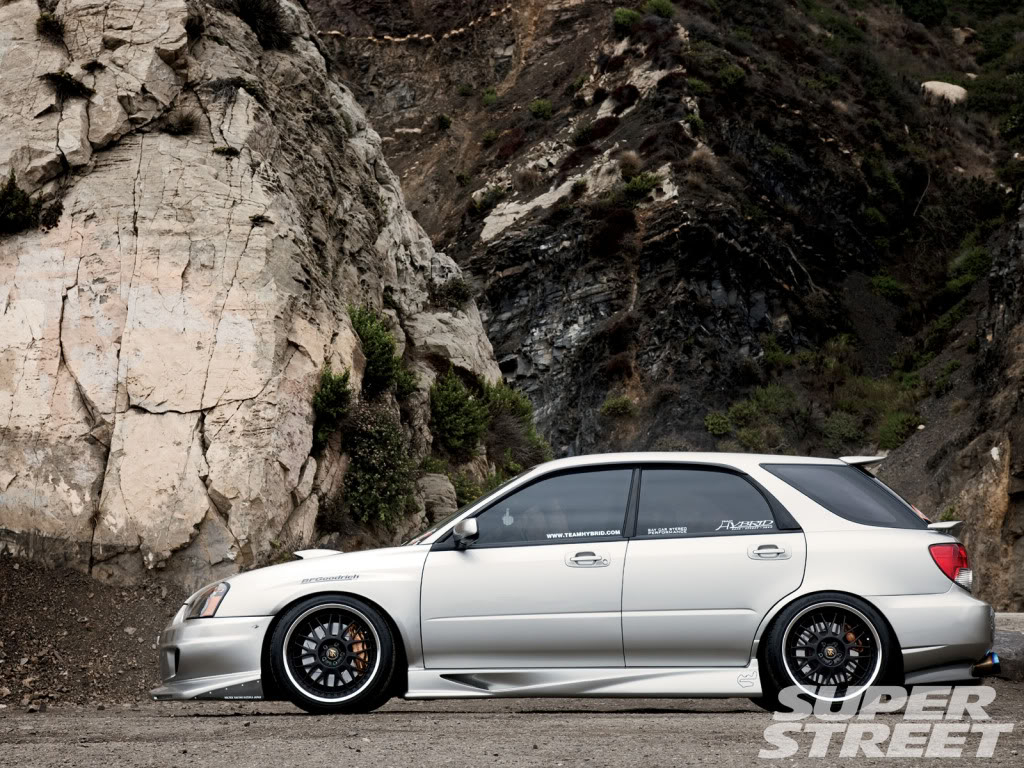 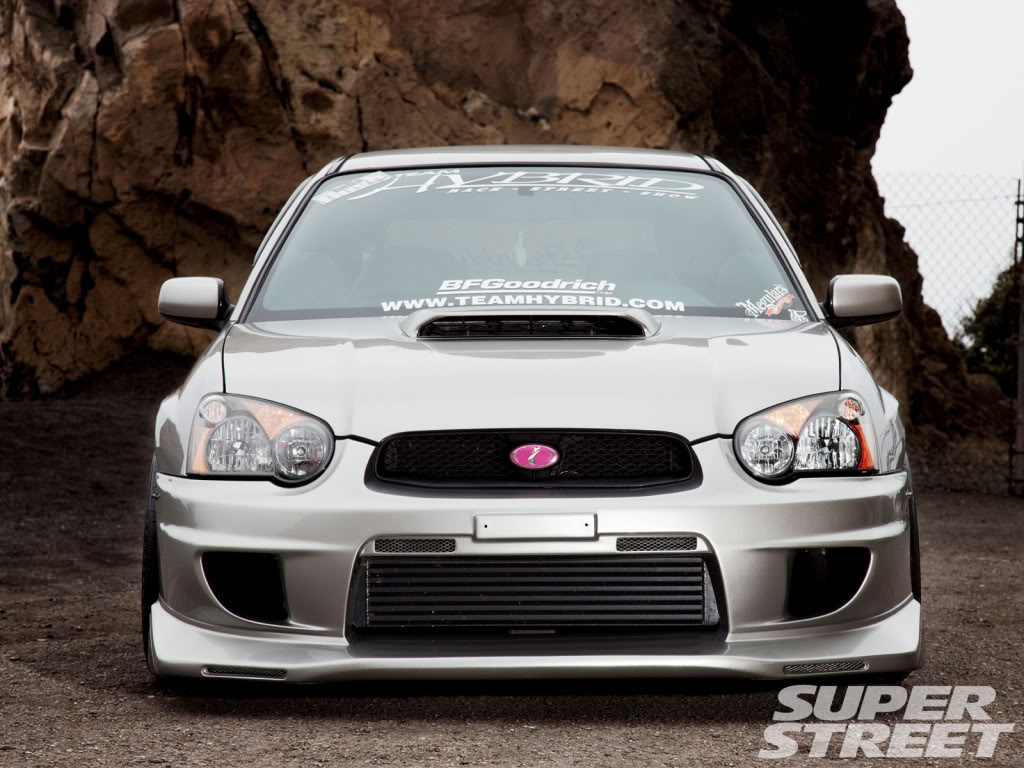 With all this work just to fit a couple items that would easily fit a Subaru STI sedan, the questions remains; why all the extra effort? “Wagons are so much cooler than sedans! There’s just something sexy about a (modified) wagon. You just don’t see them all that often and when you do, you got to love it,” Joseph says excitedly (And I totally agree! – JW). Once he completed the makeover of the exterior, extensive work began under the hood. Even if this was merely a dog transport vehicle, that didn’t mean that the wagon itself couldn’t make some power. When it comes to taking a dog from one place to another, you can never be too fast. To do all that work to make everything fit, only for his peers to realize that the wagon made no power, would be an absolute embarrassment. He would have none of that and immediately got down on the EJ20T motor. The OEM turbine was swapped out in favor of a much larger Tomei ARMS unit. Perrin joins the party with their air intake, assorted turbo piping and front mount intercooler. Since the wagon was also being used regularly for various errands, Joseph went with the “stealth” variation of the Perrin intercooler, which is coated in flat black to make it less obvious to the naked eye. Even with the stealth treatment up front, a Trust full titanium exhaust amplifies the familiar tune of the boosted flat-four motor. 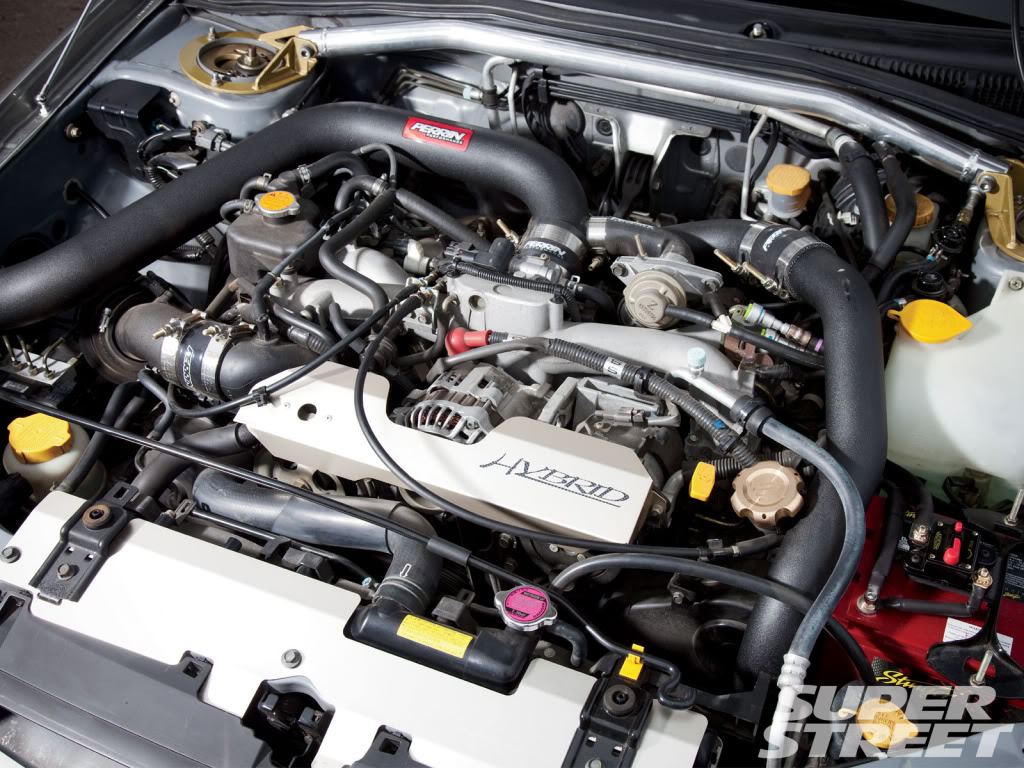 The appropriately named Stance GR+ Pro coilovers give this wagon a menacing “stance” as it sits flush on the Work wheels. A collaborative effort between Whiteline, Cusco, and Beatrush suspension components ensure that the family dog sits firmly in place as he ambushes the streets on way to the groomer. The interior has been overhauled with re-wrapped black suede/red-stitched panels and the OEM front seats have been replaced with Recaro front buckets originally from a Mitsubishi EVO 9. The limited edition Vertex 10th Anniversary steering wheel and shift knob act as finishing touches to Joseph’s interior.

This “hybrid” of a wagon, no matter what he uses it for, is most certainly a unique, one-of-a-kind build. Though it has been assembled with mostly race-bred parts, nobody can tell Joseph that his wagon isn’t functional. It functions as a transport vehicle and it looks really cool doing just that. “It’s funny to see people’s reaction when an 80-pound fur ball jumps out of the back of the wagon-it’s priceless.” 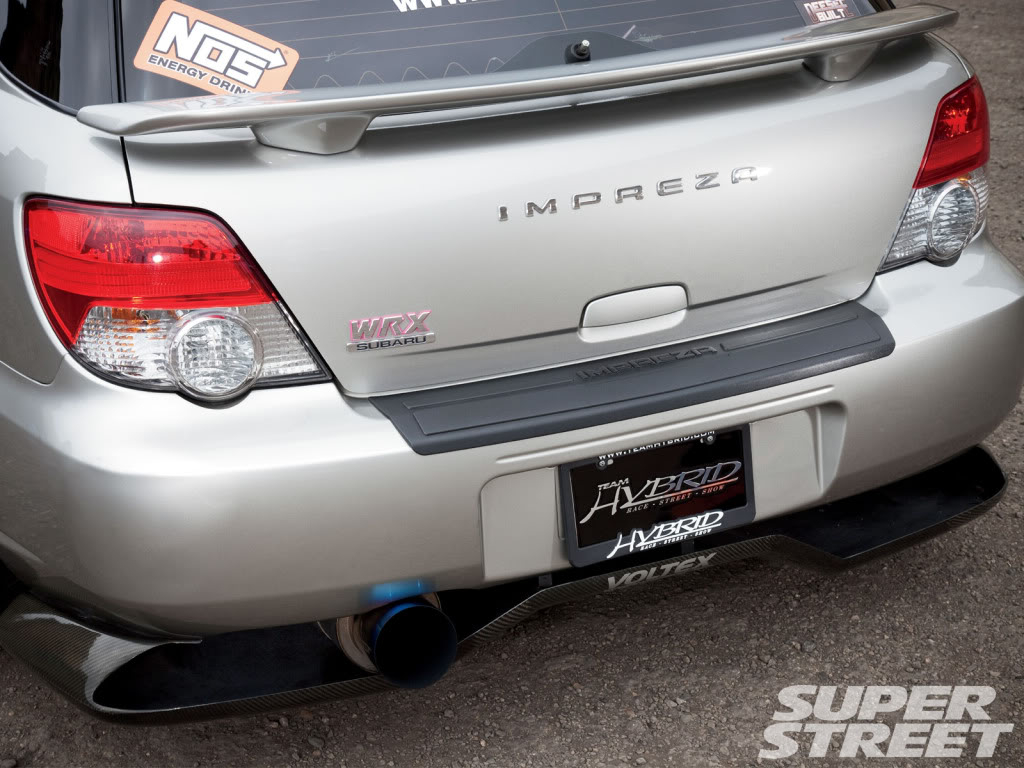 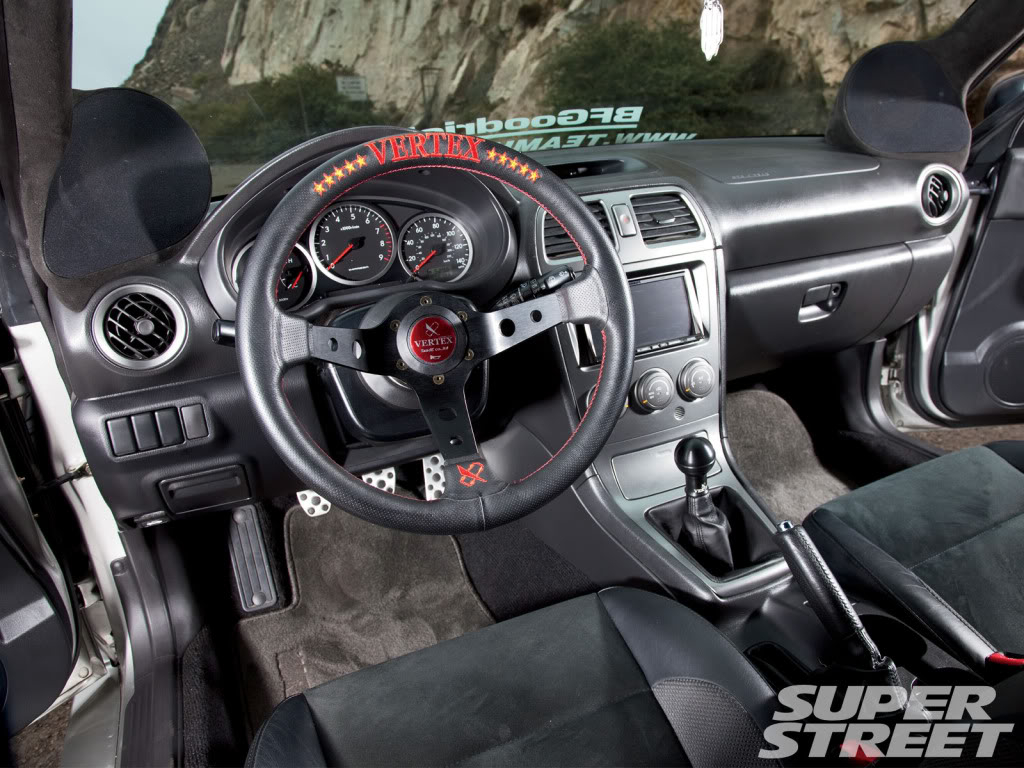 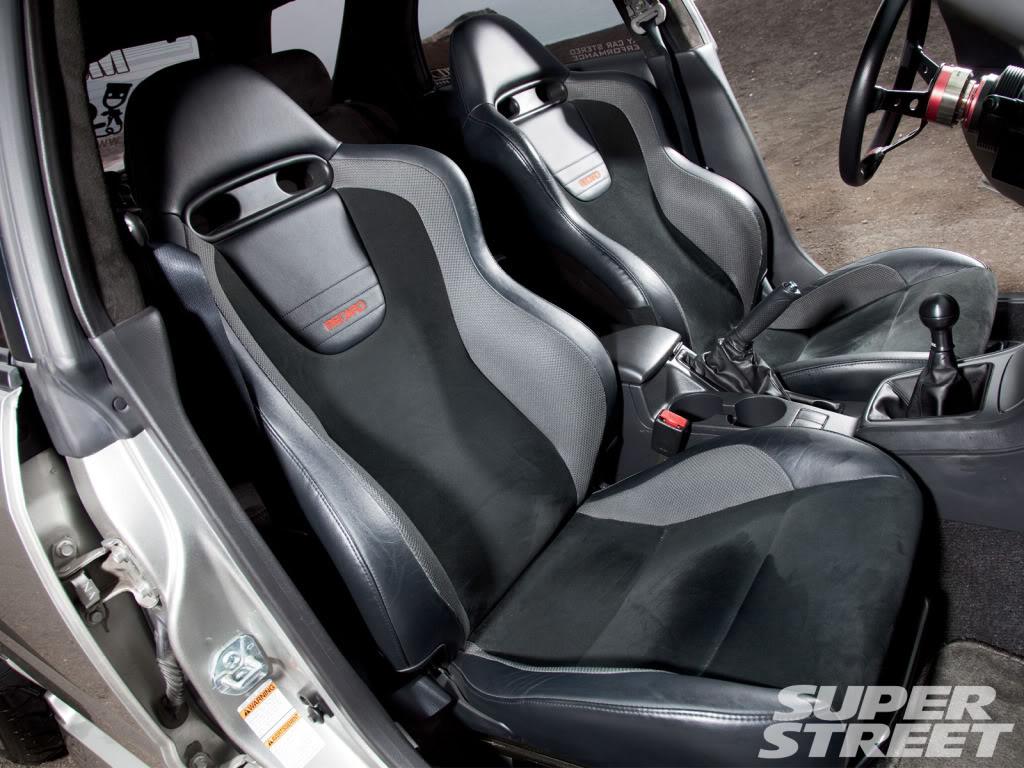 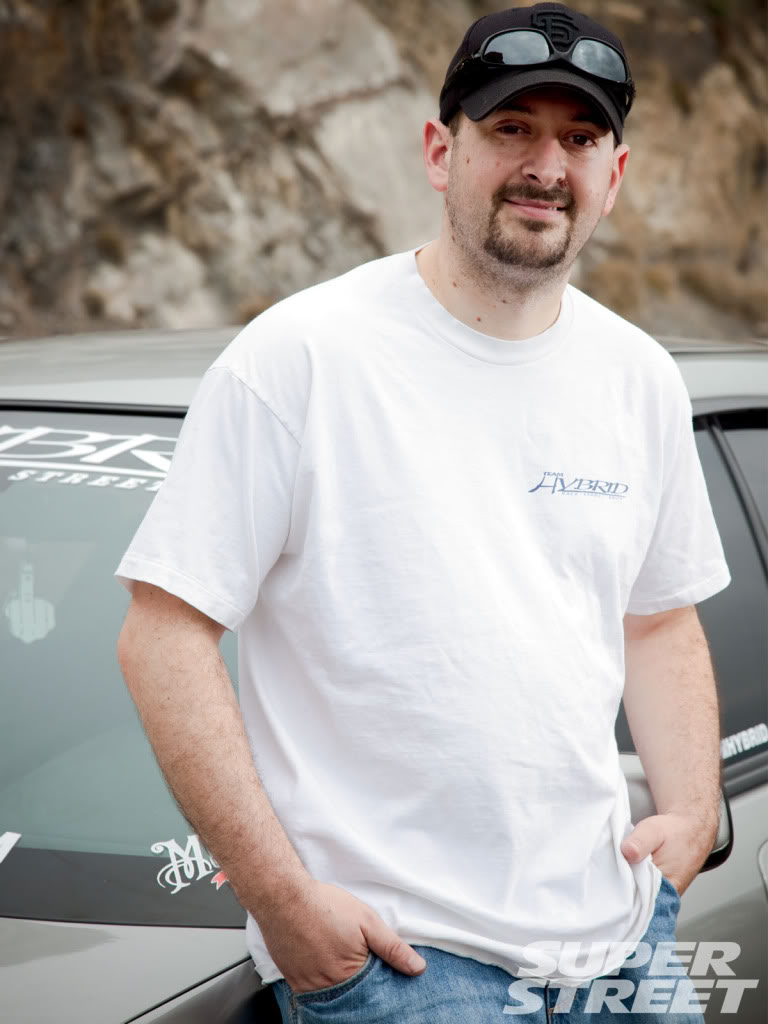